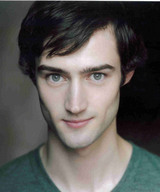 Will Connolly is originally from Montclair, NJ, and a recent graduate of Yale School of Drama, where his credits included: Iago in Othello, Tuzenbach in The Three Sisters, and Francis Upton in The Current War. Will is the co-author and composer of an original, indie-rock musical, Fly By Night, which has received productions at TheatreWorks (Palo Alto, CA), Arts Nova (NYC) and Yale Cabaret. Regional and International credits include: The Lieutenant of Inishmore (Southern Rep), SPACEBAR: A Broadway Play By Kyle Sugarman (Connelly Theater, NYC), The Lonesome West (440 Studios, NYC), Much Ado About Nothing (RADA, London), A Day In Dig Nation (Amsterdam Fringe), Always Almost Something (Bogazici University, Istanbul). In 2005, Will co-founded The NOLA Project, a non-profit theatre based in New Orleans, with whom his credits include: The Cripple of Inishmaan, The Misanthrope, The Wind In The Willows, and the world premiere of Get This Lake Off My House. Will is also a musician/singer/songwriter. Education: B.F.A., NYU; M.F.A., Yale School of Drama.