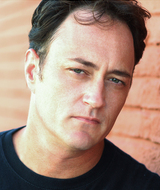 Highlights of Mr. Durkin's work include That Championship Season (2006 Carbonell Award), the title role in The Lieutenant of Inishmore (2008 Carbonell Nominee for Best Actor), This is How it Goes and BUG (2006 Carbonell Nominee for Best Actor). A Company Member of Mad Cat Theatre, he was last seen there in Some Girls by Neil LaBute, Mr. Marmalade and Artful Dodgers. At Mosaic Theatre, he appeared in Will Enos' Pulitzer Prize nominated Thom Pain (based on nothing) (the title role), The Pull of Negative Gravity and Dealer's Choice (2006 Best Supporting Actor Carbonell Nomination), and at Florida Stage in Hatchetman. Past theatrical credits include: Much Ado About Nothing, A Midsummer Night's Dream, The Tempest, Love's Labour's Lost, Gus in the PEA, Riff-Cat Polito in The Virtual Adventures of Riff-Cat Polito, BUMP, Beggar on Horseback, Salt-Water Moon, Agamemnon, as Touchstone in As You Like It, as Hamlet in Hamlet and as Lenny Bruce in Julian Barry's Lenny (1995 Best Actor Carbonell Nomination and Miami New Times Best Actor in a Comedy). During his eight years in New York, Todd worked at Cherry Lane Theatre, Theatrix Theatre, Vital Theatre Company, Theatreworks USA and Peccadillo Theatre Company. TV and film credits include: Toothpaste, Reindeer Games, America's Most Wanted, Ghost Stories, Golf Balls, and Vote Early, Vote Often.