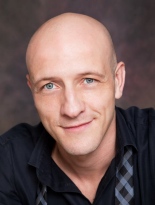 A native of France, Tangi started his acting training in Paris at the renowned Simon Academy in 1997. After reaching the USA, Tangi joined Bob Carter's AWRC where he performed in T. Williams and J. Goode's plays. In 2004, he joined PBD for the musical Jacques Brel is Alive and Well and Living in Paris which earned him Carbonell and Curtain Up Award nominations for Best Actor. He received the Curtain Up Award for Outstanding New Performer in a Musical, and the show won Best Musical in both ceremonies. He appeared in The Apple Tree and Fiddler on the Roof, was featured in the French movie The Cruise, and Step Up Revolution. Tangi works doing voiceovers and script translations for foreign films, and has been touring all around America and the world to reveal what French singing is really about in his own show, Pardon My French.