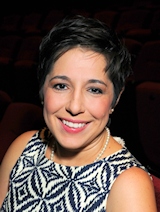 Sofia Crowell graduated from the University of South Alabama with a degree in Theatre where she was nominated for an Irene Ryan award much to the chagrin of the acting students. Over the years, she has worked in all aspects of theatre from crew, costumes, carpentry, to front of house and has been with Palm Beach Dramaworks as the Box Office Manager since 2011. Previously she was Systems Manager at Florida Stage where she met her husband, Richard. Sofia resides in Lake Worth with Richard and their darling little boy, Theodore.