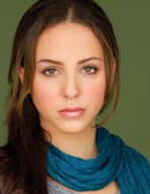 Skye Coyne was six years old when her mother took her to a performance of How to Eat Like a Child. Her response was, "I want to do that!" and the following year she was on stage, starring as Sallie in You're a Good Man, Charlie Brown. Countless roles came rapidly after that, including the title role in Willy Wonka, Lumiere in Beauty & the Beast, and Dorothy in The Wizard of Oz. Little did she know that 10 years later she'd be appearing with Palm Beach Dramaworks in their beautiful new home! In the fall of 2009 Skye began acting in films. She has been in high demand, playing a wide variety of dramatic roles in over a dozen films.