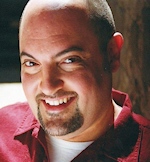 Roland Rusinek, who played Mavrodani in PBD's concert production of Zorba!, has been a working actor for over two decades. He has performed on Broadway, off-Broadway, at Lincoln Center and Carnegie Hall, on national tours, and in regional theatres across the country. He has also done some TV and film. Proud member of Actors' Equity.