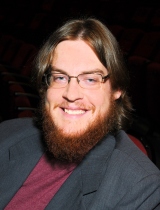 Richard Szczublewski is in his fourth season as sound engineer with Palm Beach Dramaworks. Originally from Toledo, OH, Richard is a graduate of Point Park University in Pittsburgh, where he received his BA in technical theatre/design with a concentration in live sound design and engineering. Richard has also worked with other illustrious Pittsburgh theatre companies such as Pittsburgh Irish and Classical Theatre, City Theatre, and Bricolage. Richard was nominated for a Carbonell Award for his work on All My Sons here at Dramaworks. Other design credits include Next to Normal, The Wedding Singer (Slow Burn), Peter and the Wolf, Seussical Jr., A Child's Christmas in Wales (Pittsburgh Playhouse); and Speech and Debate (Bricolage).