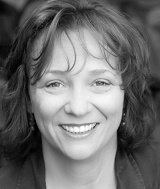 Patricia Goodrich earned her BA in theater from Florida State University where she had the opportunity to work with such artists as Joseph Papp, Raul Julia, Roger Reese and Albert Inurato. She continued her training at the prestigious Alliance Theater in Atlanta, GA. While in New York she worked with Michael Shurtleff, Nigel Rideout and at the National Improvisational Theater. She has worked professionally in both film and theater and has worked extensively as a voice over artist in the southeast for both commercial and theatrical companies. Her most memorable roles are Nina, in The Seagull, Madame de Tourvel in Les Liaisons Dangereuses and May in Fool for Love. She has created numerous roles such as Ruth in Ruth Among the Rushes with Dow Raku and Klein Dance. Patricia has worked locally at Florida Stage, Rinker Playhouse at The Kravis Center, Theatre West, and GableStage to name a few. She recently completed a starring role in a science fiction feature film, Ares 11. Currently she is a lead instructor for the Creative Stage and Outreach Program at the Lake Worth Playhouse, where she has also directed numerous children's theater and main stage productions. In addition, Patricia is working towards a master's degree in social work. She has a supportive husband and two remarkable children, all whom share her love for the arts.