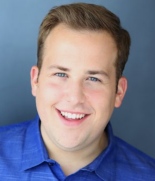 Matthew was last seen in South Florida as Ellard in Maltz Jupiter Theatre's 2014 production of The Foreigner, which won the Carbonell Award for Best Production of a Play and earned him a nomination for Best Supporting Actor. Other theatre includes Bear in White People (Ensemble Studio Theatre, off-Broadway), Lexy Mill in George Bernard Shaw's Candida (Pittsburgh Public Theater), Benjie in the musical Summer of '42 (Casa Mañana), and Piggy in Lord of the Flies (Barrington Stage Company), a role he will reprise in the new year. Matthew is a graduate of the Neighborhood Playhouse School of the Theatre and a member of Godlight Theatre Company in NYC.