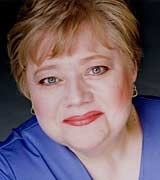 A seasoned Broadway performer, Mary has appeared in Jane Eyre, Beauty and the Beast, Copperfield, Me and My Girl, My Favorite Year, and A Change in The Heir. For four seasons, Mary played Eugenia Bremer (the organist) in the AMC award-winning series Remember Wenn. She has toured in numerous shows (including Fiddler on the Roof here at Kravis) and was a featured voice in Disney’s Aladdin and The Hunchback of Notre Dame. Last year, Mary played Mrs. Leacock in Far From Heaven at Playwrights Horizons and Williamstown Theatre Festival, and was Mother Dear in the North American premiere of Betty Blue Eyes.