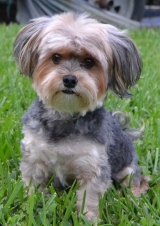 Lola was rescued in late 2009 from Charlotte Animal Hospital in North Carolina. Raised in the theatre, Lola's early years were spent as the Puppy in Residence at Florida Stage. Now living in Wellington, she passes her days playing with her best friend, Emma the Goldendoodle. She is thrilled to be making her debut on the PBD stage!