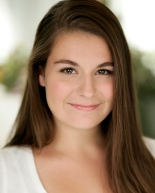 Lillie Ricciardi made her Broadway debut in June as a member of the ensemble in the concert presentation of Bombshell, the musical from the TV show Smash. She is a recent graduate of NYU Tisch: the New Studio on Broadway, where she received a BFA in Drama/Music Theatre. Favorite credits include Spring Awakening (Martha), The Wild Party (Miss Madelaine True), Company (Amy), Bonnie and Clyde (Emma/Trish), and The Dead (Kate). Regionally, Lillie has performed at The Shakespeare Theatre of New Jersey, Shakespeare in the Valley, Paper Mill Playhouse, Different Stages Theater, and now PBD.