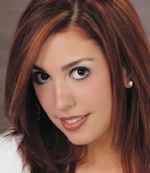 Leah Sessa is a native of West Palm Beach and a graduate of Palm Beach Atlantic University. This is her fourth production with PBD, having previously played April in Company, multiple roles in Man of La Mancha, and Lady Anne in Camelot. Other recent credits include Pippin at Boca Raton Theatre Guild, I Love You, You're Perfect, Now Change and 8-Track: the Sounds of the '70s at the Plaza Theatre, and Rumors and Jerry's Girls at Broward Stage Door.