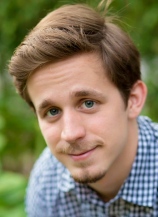 Kristian is a South Florida native and has been working the area's professional theatre circuit for over a year. Prior to his PBD debut, he appeared in The Aliens (Evan) at Alliance Theatre. Other South Florida credits include Daniel's Husband (Trip) at Island City Stage, Octopus (Telegram Delivery Boy) at Island City Stage, and Carrie the Musical (Billy Nolan) at Slow Burn Theatre Company. He is the recipient of a Silver Palm Award for Outstanding New Talent. Like his actor page on Facebook: Kristian Bikic.