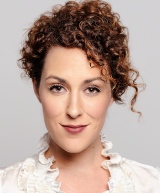 Katie Cunningham is based in New York City and works regularly on New York stages and in a host of regional theatres across the United States. Katie is honored to work regularly with TACT, The Actors Company Theatre, where she recently appeared as Charlotte in Arthur Wing Pinero's The Magistrate and in a number of developmental readings. Additional NY credits: FringeNYC, American Place Theatre, The Night Shift (co-founder), Drunken Shakespeare (co-founder). Florida credits include two seasons and several leading ladies at Sarasota's Asolo Rep (Our Betters, Both Your Houses, God of Carnage, Once in a Lifetime, and others) and Urbanite Theatre (Lungs). South Florida: Secret Order at Caldwell Theatre Company. Katie is a lead teaching artist at McCarter Theatre Center in Princeton, where she teaches acting and directing. She holds a BA from UNC Chapel Hill, an MFA in acting from FSU/Asolo Conservatory, and is a proud member of AEA and SAG-AFTRA.