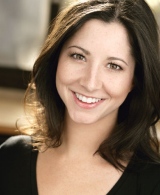 Credits include the Broadway National Tour of Big, the film CAMP, and numerous national commercials. Julie Kleiner has worked steadily in South Florida since moving home over 7 years ago in theaters such as The Wick, Actors' Playhouse, The Maltz, GableStage, and the Broward Center to name a few. She recently starred in the revival of "Having a Kleiner Davis baby!" She is a Carbonell winner and a proud member of The Dramaworkshop.