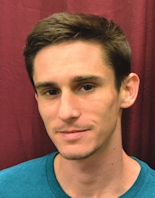 Joshua Stoughton discovered an affinity for theatre in college, acting in several productions at PBSC and FAU. Favorite roles include Ariel in Martin McDonagh's The Pillowman and Keith in Christopher Durang's Betty's Summer Vacation. Josh interned with the Take Heed Theater Company and has performed with the Mod 27 improv troupe. He became the deck chief for PBD last season, and recently made his professional acting debut as the priest in Zorba!. He was also the assistant stage manager of that production.