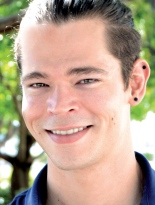 A South Florida native, Jordon graduated from FAU with a BFA in performance and recently completed the coursework for his MFA in performance at FAU as well. His roles include Sir Harry (Once Upon a Mattress), Simon Bliss (Hay Fever), Duke of Cornwall (King Lear), Harry Horner (The Country Wife), and Steven Kodaly (She Loves Me). He has also appeared in several play readings at FAU's Theatre Lab, and as Claudio in Outré Theatre Company's production of Much Ado About Nothing. He is currently teaching Speech for the Actor at FAU.