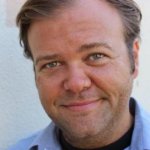 David Nail made his PBD debut last season as Bradley in Sam Shepard's Buried Child. He returns to PBD's mainstage after appearing upstairs in the Perlberg Studio Theatre in Jennifer Fawcett's Buried Cities earlier this year. David has been splitting time between Seattle (where he is the artistic director of Studio4Seattle) and South Florida for the past six years, working not only as an actor, but also as a stage manager, lighting designer, and director. Recent acting credits include Sam in Annie Baker's The Flick at Mad Cat Theatre Company in Miami Shores, Stanley in Tennessee Williams' A Streetcar Named Desire with Civic Rep in Seattle, and Israel Horovitz's Gloucester Blue at Harlequin Productions in Olympia, Washington. David is the resident lighting designer and production manager for Theatre Lab at FAU in Boca, now in its second season.