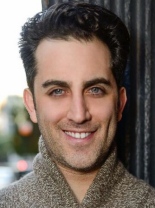 Cooper Grodin is making his PBD debut. A native New Yorker, he recently played the title role in the new national tour of The Phantom of the Opera. Other tours include Les Misérables  (25th Anniversary national tour), and Zorro (title role, first Asian tour). In New York, Cooper was Rapunzel's Prince in the Shakespeare in the Park production of Into the Woods, and also appeared in The National Yiddish Theatre's acclaimed production of The Golden Land, which was nominated for a Drama Desk award.  His original album, It's the Little Things, is available on iTunes.