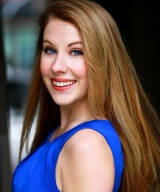 Catherine League is a proud graduate of Oklahoma City University, where some of her favorite roles include Johanna in Sweeney Todd and Clara in The Light in the Piazza. Other credits include Eponine in Les Misérables at the Edinburgh Fringe Festival, Rapunzel in Into the Woods, and Morgan Merritt in the musical Placebo. She currently works in Orlando making magic for the Walt Disney Company in Voyage of the Little Mermaid.