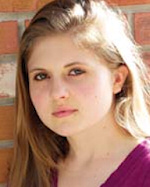 A senior at Coral Springs High School, Arielle has been around theatre most of her life. At a very young age she began performing, starting at Ft. Lauderdale Children's Theatre and continuing at PPTOPA community theatre. Her professional theatre credits include the New Vista Theatre productions of Fiddler on the Roof and The Rise of David Levinsky (under the direction of her father Avi Hoffman), and most recently she played a starring role in the soon to be released, independent SAG feature film Finding Joy (opposite Barry Bostwick and Lainie Kazan). She is the Florida State District 7 representative in the International Thespian Society, a Broward Center for the Performing Arts Teen Ambassador and a Lead Cappie Critic for the national high school critics and awards program. She would like to thank her little sister, Liana, for putting up with all of her crazy shenanigans. Playing her first significant role in a professional theater opposite her mom, Laura Turnbull, is a dream come true.