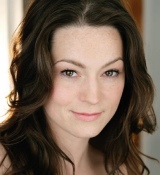 Anne Bates most recently played the narrator in Discord at Culture Project in NY. As a member of FAB Women, a theatre company in NY, she acts in and directs new works. She appeared as Laura in The Unexpected Guest (The Fulton, PA), Claire in Proof (Red Door Theatre Co./ Barrow Group Theatre , NY), and directed Kiss My Paczki, Mr. King of the World (American Globe, NY). Other acting credits include Ondine, Soho Rep/Walkerspace, NY; Othello (Desdemona) and The Merry Wives of Windsor (Anne Page), both at Houston Shakespeare Festival; and Dysteria, Atlantic Studio Theatre, NY. She toured the US as Mariane in Tartuffe and Miranda in The Tempest with the Acting Company. Additionally, she performed a lead in the American premiere of A View from the Roof (Barrington Stage, MA) and played Posthumus in Cymbeline (Expanded Arts, NY). Films: Eden in The Collective; Goneril in King Lear, starring Paul Sorvino. TV: Unforgettable (Allyson Tate) and 30 Rock. She is a graduate of The Juilliard School and a Member of AEA and SAG. Special thanks to her supportive family.