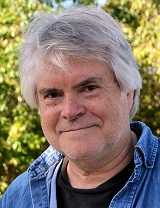 Allan Baker is from Neptune Beach, where he's best known as resident beach bum and semi-monitor. Last seen at Actors' Playhouse as Mayor Meekly in Unnecessary Farce, he has also appeared there in Urinetown and Becky's Car. Additionally, he was part of the Carbonell Award-winning ensemble of Lend Me a Tenor at Caldwell Theatre Company, where he was also seen in Lying in State. Allan is delighted to take another crack at 1776, which he first appeared in as John Adams at the Mark Two in Orlando. Following 1776, Allan returns to the open road, where he'll resume writing his second book, Slightly Askew: We're doing this again?!, a continuation of the first Slightly Askew, an e-book at Amazon.com.