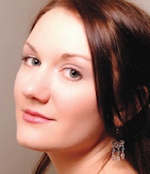 Alexandra Hale makes her Palm Beach Dramaworks debut in Company. Most recently seen on the opera stage, she made her Florida debut in November as Barbarina in Orlando Philharmonic's production of Mozart's Le Nozze di Figaro, and later reprised the role at Maine's Bar Harbor Music Festival. Other roles include: Semele in Handel's Semele, Lucy in Menotti's The Telephone, Isabelle/Sabine in The Liar, and Janet van de Graaff in The Drowsy Chaperone. She currently resides in Fort Myers where she is the marketing associate at Florida Repertory Theatre.